Bespoken by Dr. Rebecca Sharp is coming September 10th! Don’t miss a captivating and emotional romance where sparks fly from opposite sides of the track and ignite a love that can’t be denied…. #Pre-order today! 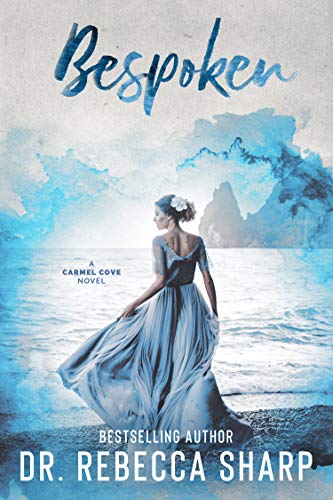 As the heiress to the Rock Beach Resort, her glamorous world was perfectly tailored to further her parent’s empire.

After her grandfather’s death, one fateful night forces Jules to see her palace for what it really is—a pretty prison. Risking her family’s wrath, she’s decided to forge a new path—one that leads straight to the man she can’t stop thinking about… the same chivalrous carpenter who knows more about that night than he’ll admit; Mick Madison.

A Texan transplant with a giant heart, Mick knows he should keep his distance. After all, dusty jeans and scuffed work-boots might as well scream ‘commoner’ rather than carpenter. Yet Mick can’t convince himself to stay away… 𝘰𝘳 𝘵𝘰 𝘴𝘵𝘰𝘱 𝘧𝘢𝘭𝘭𝘪𝘯𝘨 𝘧𝘰𝘳 𝘢 𝘸𝘰𝘮𝘢𝘯 𝘴𝘰 𝘧𝘢𝘳 𝘰𝘶𝘵 𝘰𝘧 𝘩𝘪𝘴 𝘭𝘦𝘢𝘨𝘶𝘦.

But when Jules’ prestigious family is linked to crimes happening in Carmel Cove, the road to her future splits, and she’ll have to decide between a life she was groomed to live and a life she was made to love.

**Bespoken is the second book in the Carmel Cove series and can be read as a 𝗰𝗼𝗺𝗽𝗹𝗲𝘁𝗲 𝘀𝘁𝗮𝗻𝗱𝗮𝗹𝗼𝗻𝗲.

Add to your Goodreads TBR: https://bit.ly/Bespoken_GR