He’ll do anything to keep them safe. 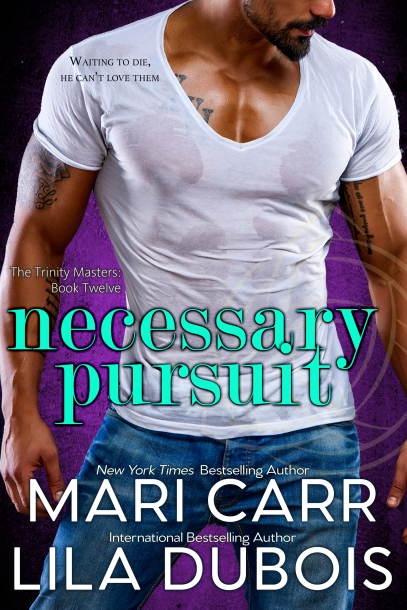 Oscar has no desire to join one of the two secret societies issuing him invitations and he sure as hell isn’t interested in an arranged menage marriage. They say you can’t die of a broken heart, but he almost did.

Deadly circumstances throw sexy physicist, Selene, and a dangerous man with a price on his head in his path. Now he’ll do anything to keep them safe.

All they have to do is evade a serious threat from a religious cult, defuse a bomb, prevent a war between the Trinity Masters and the Masters’ Admiralty…oh…and stay alive. 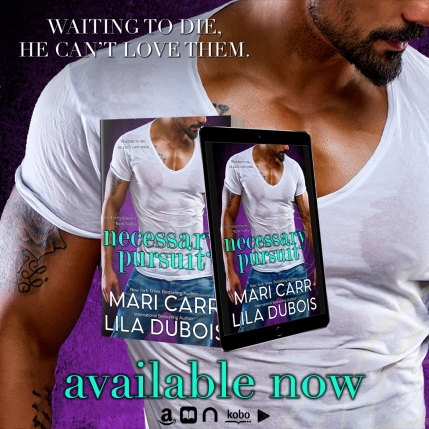 Necessary Pursuit by Mari Carr
My rating: 5 of 5 stars

This book isn’t your typical Trinity Masters story. It doesn’t begin with strangers that are “called to the alter”, who then fall madly in love, solve a mystery and all is right in their world. Nope. The authors went in a different direction this time, and in doing so, kept me guessing! Several times, I had to stop for a minute, and ask myself, “did I really just read that?!?” or “what the heck just happened!?!” That’s what I love about this series. Just when I think I know what’s going on, the authors pull out the big guns, and go in a completely different direction!

This book was explosive right out of the gate. The characters had off the charts chemistry, and a connection that nothing could stand in the way of. Each had their own baggage that they brought to the story, and there were lots of things that tried to keep them apart, but in the end, the HEA always wins out! However, the ending of this book wasn’t what I expected, and I’m not sure how I feel about that. Their story doesn’t feel finished, and I think the authors have more in store for this trio. Maybe the authors have something big planned? I’m not sure, but I know I can’t wait!

Oscar had found the pack of cards in the kitchen’s junk drawer, which, as anyone with any sense knew, was where a pack of cards should be. Luca had sheepishly admitted to playing poker on phone apps, but he had never played with other people.

“Then you were playing the cards, not the table.” Oscar shuffled and set the deck on the table in front of Selene.

She tapped it with two fingers and Oscar arched a brow.

“I try to replicate the power of the sun for a living.” Selene adjusted her glasses in a sexy librarian way. “You think I’m scared of taking risks?”

“It’s like watching sexy American TV,” Luca said, glancing back and forth between them.

“You think we’re sexy?” Selene asked. “I mean, me too. Obviously Oscar is sexy.”

Luca blushed. “Yes. I mean, you’re both… It’s…” He stared at the cards as Oscar dealt. “Remind me of the rules.”

“Straight poker. Five-card stud. Nothing wild. Keeping it simple this first round. Selene, deal out the chips.”

Selene gave them each ten sauce packets, also gathered from the junk drawer.

They glanced at their cards, discarded, took more, and placed their bets. To his surprise, Luca raised, then raised again.

“You must have a very good hand,” Selene said.

Luca glanced at each of them. “I build and design bombs for a living. Maybe I am simply taking a risk.”

Oscar whistled and slapped the table. “It’s going to be a game of who has the biggest nerd balls.” He pushed the rest of his hot sauce packets toward the center of the table. “Too bad for you two, that’s me.”

Selene had a flush—all hearts. Appropriate.

Luca had three of a kind.

Oscar lay his cards out. “Full house, tens, and queens.”

Selene drummed her fingers on the table, anxious for a rematch. It appeared his nuclear scientist was competitive. “Deal.”

She won the next round, but he’d bet conservatively, losing only two hot sauce packets. On the third round, Oscar folded, losing only one in the process.

By the fourth hand, he still had most of the packets in his bank and was humming “The Gambler.”

“Don’t get too worked up, Tanaka. It’s just poker. Now, if we were playing spades…” Every game of spades between him and his siblings had ended in violence. Every. Single. One. Always followed up by one of them yelling, “I will never play cards with you again!”

Selene dealt, and Oscar’s smile had grown in time with his pile of hot sauce packets. He was waiting until Selene realized something she’d missed.

“I raise…” Selene trailed off as she finally noticed she was out of “money.”

“You have to fold?” Luca looked up from frowning at his cards.

“Strip poker.” Oscar sat up, staring across the table at her to try to read her mind. She glanced at Luca, then back to him, and shrugged slightly.

“What is strip poker?” Luca asked.

“You bet with your clothes. You lose and you have to take off something.”

Luca cleared his throat and tugged at the front of his shirt.

The bi guy who grew up in a nutso religious cult was probably wishing he was a thousand miles from here.

“Let’s not.” Oscar picked up some sauce packets, prepared to pass them to Selene.

“If she keeps losing…will she, will you, take off all your clothes?” Luca asked.

“Those are the rules,” Oscar said, grinning when he realized Luca wasn’t as averse to the idea as he’d assumed. “But you’d have to take off clothes as well.”

“Oh, you’re going to lose.” Oscar let the hot sauce packets spill from his hand back onto his pile.