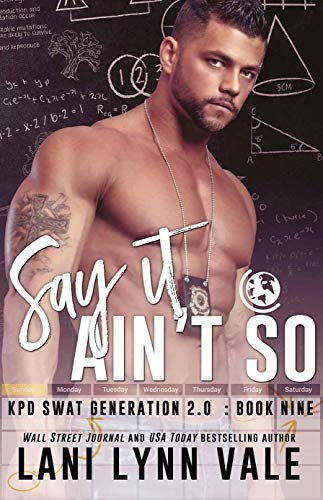 Say It Ain’t So

He should’ve never left his house. He should’ve stayed at home. He has a legitimate excuse—he’s running a fever and he’s fairly sure he’s developing pneumonia. He should have called in sick…but he doesn’t.

He goes to work, because his team is relying on him.

First, he has to sign about eight thousand calendars—all from women who purchased said calendars to benefit the Fallen Officer fundraiser. And when he’s done with that, he has to endure a television interview along with the rest of the SWAT team seeing as they made national news with their ‘Hot SWAT’ calendar that’s sold a million copies to women all over the world.

Needless to say, when Samuel Adams walks into the pharmacy hours later, he only has one thing on his mind. Ibuprofen.

Sadly, he never gets to the Ibuprofen. Mostly because before he gets there, he finds a junkie waving a gun around threatening to kill anybody that moves.

He’s running a fever. That has to be the reason that the girl in the corner begins cursing up a storm and drawing the junkie’s attention. Has to be.

And, of course, that’s when the curse words start flying.

The more nervous she gets, the worse her Tourette’s becomes. Which is, of course, why she stands up and gives the man a perfect target.

Thank God that the coughing giant in the corner makes the same move and saves her life.

And how does she repay him? By calling him every awful word in the dictionary.

Say It Ain’t So by Lani Lynn Vale
My rating: 5 of 5 stars

While there are some elements that are common within a genre, there is always something about a new story that sticks out. Something that sets it apart, makes it special. It could be the characters, the story line, an especially hot connection, or something as simple as a wonderfully poignant setting. With Sammy and Hastings started their story with something so off the wall, it could have only have happened to one of the Spurlocks!

Sammy grew up with a close knit family, and friends so close they might as well be family. He has heroic male role models, and examples of what a strong female should be. And he is doing everything he can to prove he can live up to the man he knows he can be. Until everything changes, without any warning!

Hastings is an odd duck, that is for sure! But she has overcome what could have been a crippling disability, and made life work for her! But life sure has a way of throwing a curve ball, especially when you aren’t looking for it!

This story was a roller coaster, and had my emotions all over the place. Hastings and Sammy had their issues, and their own ups and downs while figuring out their relationship, and what path they had to take to find their HEA. But there were parts of this story that my heart just plain hurt, and I couldn’t stop crying. Big, Ugly Tears! A beautifully endearing story, that will surely stick with me for a long time!