Teaser Reveal for Defying Our Forever by Claudia Burgoa 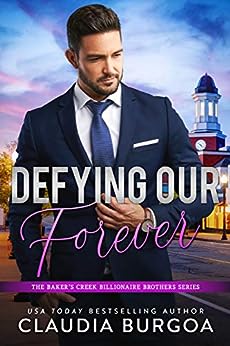 Fresh out of Vet school, I married Pierce Aldridge. Gorgeous, sexy, and smart. He’s a philanthropist with a heart of gold, or so I thought.
But after a while he became distant, self-centered, and callous. The man I married disappeared before my eyes. I should leave him, but I can’t do it just yet.

There’s one thing I need but I can’t have it if I divorce him. Just a few more months…

But my plans fall through when his father dies.
The man was just as ruthless as his son.

Now I can either spend eighteen months with Pierce in his hometown playing the happy couple or I could avoid the ordeal entirely if I sign the divorce papers. But I would lose the one thing I’ve been wanting my whole life.

The more time that passes, the more I realize that maybe I’ve been wrong.
Maybe the man I married is still there. The man I still love.

But is it too late?

The Baker’s Creek Billionaire Brothers series is a romantic comedy saga packed with the perfect mix of angst, tears, and laughs. If you like strong heroines & alpha males, steamy romances and witty love stories, this series is for you!